Forty-five years ago, on Saturday, January 29, 1977, The Rev. Doris E. Mote became the first woman to be ordained priest in the Diocese of Southern Ohio.

At the General Convention in Minneapolis in 1976, more than 100 women deacons were serving in 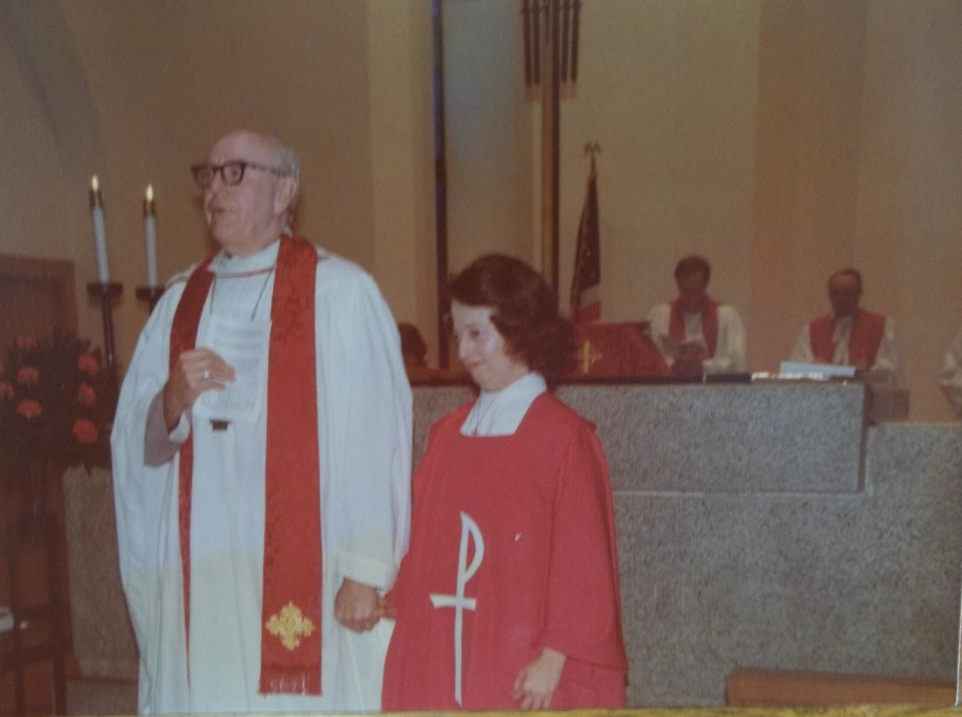 Among the deacons at the Minneapolis convention was the Rev. Doris Ellen Mote, 38, parish assistant, Christ Episcopal Church, Dayton. Doris Mote, born in Anderson, Indiana, earned a bachelor’s degree in education from Ball State University, Muncie, Indiana. She was confirmed in the Episcopal church in Florida in 1967, moved with her husband and three children in 1970 to Dayton, where she entered the United Theological Seminary. She was ordained deacon in 1974 and graduated with the Master of Divinity degree in 1975. She came to Christ Church as an associate that year. Between September and December of 1976, she consulted with the Rt. Rev. John M. Krumm, Bishop of the Diocese of Southern Ohio, about the steps she must take to become a priest.

January 29, 1977, was a bitterly cold day. The overnight temperature was minus ten degrees and the expected high was 8. “They said Hell would freeze over before a woman is ordained a priest,” the Rev. Gordon S. Price said on that Saturday morning. “I think it has,”  Bishop Krumm replied, his breath visible in the 55° atmosphere of Christ Church. After the ordination, Bishop Krumm said, “To have a woman priest in this Diocese will make it easier for Episcopalians to accept this innovation in ministry. Nothing will convince people more of woman’s role in the priesthood than  having the Reverend Mrs. Mote working as a priest.”

The Rev. Doris Mote served at Christ Church until December 1979 when she and her two sons left Dayton following the tragic death of her daughter to accept the position of assistant rector at St. Bartholomew’s in Baltimore, Maryland. In 1992, she became rector of St. Paul’s Church in New Albany, Indiana. She died April 21, 2020.