Doris Miller and Christ Church’s Ministry to the Deaf

The Rev. Gordon Price was called to Miami Valley Hospital to minister to a woman scheduled for surgery. 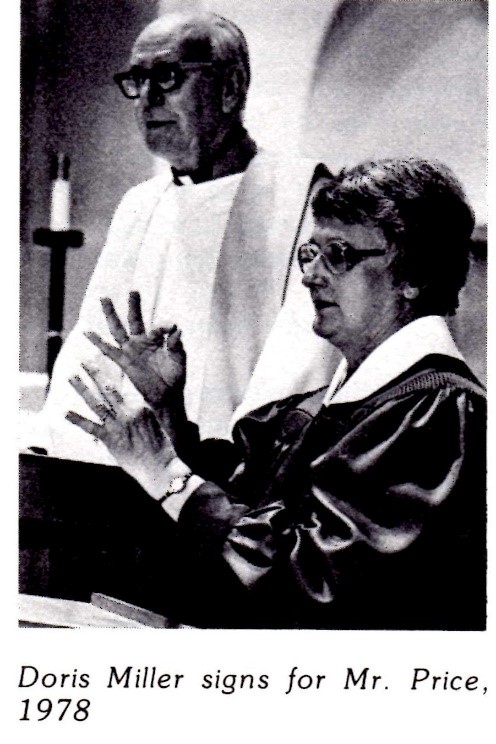 The woman was worried and deaf. The woman’s daughter arrived and signed the Rector’s words and prayers. This led Mr. Price to wonder how many deaf people are deprived of ministry. In the Diocese of Southern Ohio, the deaf congregations were little adjuncts of the city churches, but outside the mainstream of parish life. The deaf congregations were held together by a dedicated deaf priest, The Rev. George Almo, who made his rounds all across the state of Ohio. He was able to offer one service a month. One Sunday morning in 1963, the Rev. Gordon Price began his sermon and suddenly stopped the sound of his voice but continued to move his lips. After an extremely uncomfortable five minutes, the congregation realized how the deaf must feel. With the assistance of the Rev. George Almo and Doris Miller, Christ Church compiled a list of the deaf community in Dayton and invited all the deaf, regardless of Church affiliation or lack of it, to its Sunday services. Doris Miller was the only child of deaf parents. She learned to sign as a toddler and as she got older, would interpret for her parents. In March 1963, Doris was ready and the whole liturgy, the hymns, the anthem, the sermon, and the announcements were “signed.”  Ms. Ada Spidel interpreted the music. Although Ada was totally deaf herself she, according to Doris Miller, “had an inner sense of music. She sang the Lord’s Prayers on her hands in the most beautiful and interpretive way. The deaf have an inborn sense of rhythm and understand the feel of the tempo and the words from the signers.”

Doris began teaching signing classes at the church and trained interpreters to assist with Sunday services and various parish meetings. Peg Lombard became the coordinator in 1993.

Doris retired in 1988 as an Associate Professor in the Manual Communications Department at Sinclair College, after working as a medical assistant for 39 years. Sinclair Community College established a scholarship in her name; the Doris J. Miller Scholarship. She was a founding board member of Miami Valley Episcopal Russian Network (MVERN). Doris traveled to Russia seven times working with this outreach ministry in Sablino, Russia. She was also a volunteer at Miami Valley Hospital and served as chair of the Miami Valley Hospital Volunteer Board from 1993-1994. She died in December 2013.